77.34 Gbps of Bandwidth delivering 8K and Beyond

On June 27, 2019, VESA announced that it has released version 2.0 of the DisplayPort™ (DP) audio/video standard.

DP 2.0 provides up to a 3X increase in data bandwidth performance compared to the previous version of DisplayPort (DP 1.4a), as well as new capabilities to address the future performance requirements of traditional displays. END_OF_DOCUMENT_TOKEN_TO_BE_REPLACED

I love writing this annual predictions article. If you’re a regular reader, you already know this but for those that don’t, my Kayye’s Krystal Ball piece is an annual article where I not only tell you what I think is going to happen in the AV market for the upcoming year, but I also go back and review the previous year’s predictions. Sort of a scorecard of accuracy, if you will. And, 2019 is going to be an exciting year with A LOT of changes in the AV market so I hope you’ll read them all. END_OF_DOCUMENT_TOKEN_TO_BE_REPLACED

A list of the most well-known audio visual acronyms relevant to the pro AV industry today — because, goodness knows, we could use a reference!

The pro AV industry is full of technical jargon that, admittedly, makes it a little hard for outsiders to comprehend the very scope of what services are offered within it. That’s why we’ve created this easy reference guide to the most well-known audio visual acronyms. END_OF_DOCUMENT_TOKEN_TO_BE_REPLACED

Whether you’re upgrading your office conference room or crafting the ultimate home theater, a high-quality projector screen is a key part of your toolkit. But what exactly should you be looking for in a projector screen? Understanding your options is the first step in choosing the right screen for the job. END_OF_DOCUMENT_TOKEN_TO_BE_REPLACED

The HDMI Forum just announced the release of version 2.1 of it’s HDMI specification. This latest HDMI specification supports a range of higher video resolutions and refresh rates including 8K60 and 4K120, and resolutions up to 10K. Dynamic HDR formats are also supported, and bandwidth capability is increased up to 48Gbps. END_OF_DOCUMENT_TOKEN_TO_BE_REPLACED

With all the technology associated with HDMI or other digital signal transmissions, many elusive terms come into play. One term that comes up frequently is EDID (Extended Display Identification Data). EDID is the information that the digital source and the digital display uses to work correctly with each other. To put it simply, EDID refers to the method your devices use to “talk to each other”. END_OF_DOCUMENT_TOKEN_TO_BE_REPLACED

The USB Promoter Group recently announced the pending release of the USB 3.2 specification. While this is an incremental update, it turns out it is a very important one as it opens the door for multi-lane operation between USB 3.2 devices. What does this mean to you? Speeds of up to 20Gbps per second or the doubling of data capacity and speed of current USB Type-C™ cables. END_OF_DOCUMENT_TOKEN_TO_BE_REPLACED

As technology trends continue to fuel the demand for higher speed and more bandwidth, computer networks and network infrastructure are more critical than ever before. Video conferencing, 4K video streaming and the Internet of Things are all fueling the demand for reliable high speed, high bandwidth networks.

END_OF_DOCUMENT_TOKEN_TO_BE_REPLACED

As you may already know, HDBaseT™ has become the industry standard for the transmission of Ultra HD video & audio,

Ethernet, controls, USB and up to 100W of power over a single, long-distance, cable.

END_OF_DOCUMENT_TOKEN_TO_BE_REPLACED

If you own a PC, smart phone, tablet, or nearly any electronic device requiring electronic communication or electrical charging, you are undoubtedly very familiar with USB type A and have likely dealt with the frustration of incorrectly orienting the connector when connecting the cable to a device. This all too familiar struggle is about to come to an end as a new USB connector takes aim to become the king of connectors. END_OF_DOCUMENT_TOKEN_TO_BE_REPLACED 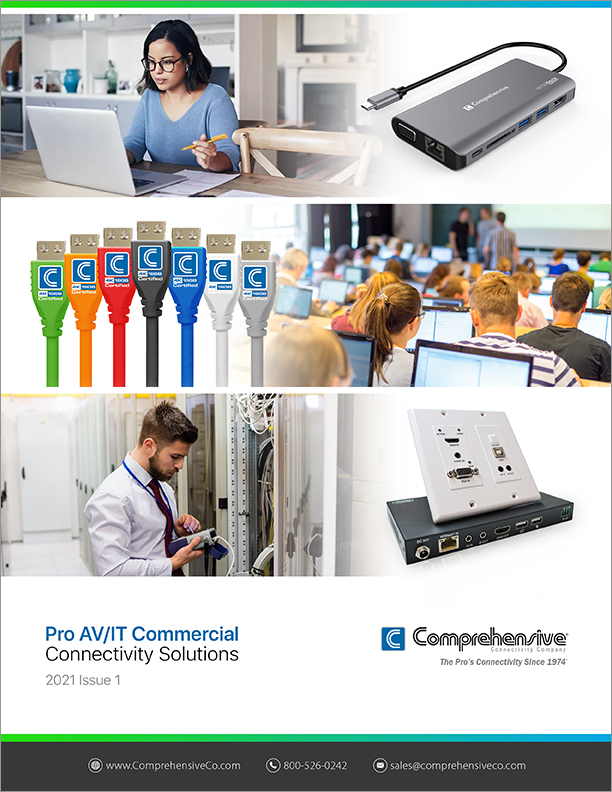